Effects of the Crisis on Business in Bahrain 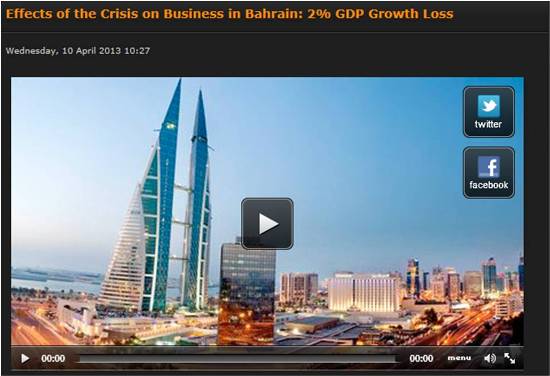 He argues, “I can’t give you a percentage decline or anything like that. I don’t have that kind of statistics. I can tell you that if you look at the GDP growth pre-crisis, we were talking close to 5% growth.

Today it’s very stable, so we are talking about maybe 2 or 3% growth which is very slow compared to where we were. The economy has slowed, that’s for sure. The real question is in terms of consequences, how many businesses have decided that it’s no longer worth continuing their operations and that’s a more permanent damage that happens, if companies start to say we’ve been here but I think it’s time for us to leave.”

Al Arrayed continues, “For me, that’s more concerning. Thankfully I don’t think that’s happened en masse. You’ve had companies that have made that decision but they were probably more based on the economics than on the political side of things. You’ve got areas where growth is much stronger like Dubai and Qatar that for a lot of companies that only want to have one base in the Gulf, maybe would consider those areas. That’s unfortunate that Bahrain has maybe lost that competitive advantage to these other countries.”