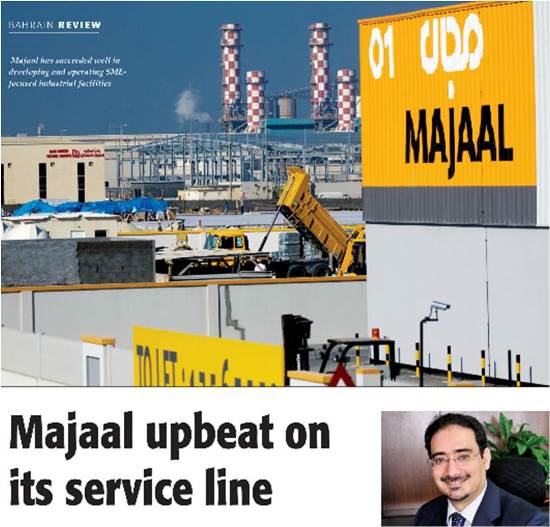 As announced in November, Majaal has been hired by Al-Mazaya Holdings of Kuwait to oversee the development and leasing of a $20 million industrial facility at the Bahrain Investment Wharf (BIW). Its services for Al-Mazaya will include conducting feasibility studies, overseeing design and construction works as well as managing leasing for the facility which will offer 15,500 square meters of industrial space for rent.
“We are expanding from space to services, building on the success we achieved with our development model over the past few years and diversifying our offerings,” said Al Arrayed, who added that one of the parties it is negotiating with for an Al-Mazaya-type deal is based in Bahrain while the other is located in Saudi Arabia.

Majaal, a wholly owned subsidiary of Kuwait’s First Bahrain Real Estate Development Company, expects the two new deals will materialise in the first half of 2014.

“The move into the services line of business is one of our significant achievements during 2013,” said Al Arrayed. “From the beginning, we have employed franchise thinking and thus our business model envisioned offering development management, leasing management and facilities management services. The story of our success is becoming well known in the market where we have proven we can achieve targets and deliver excellence. This positive reputation opened the opportunity for the Al-Mazaya deal and, hopefully, it will be the just the first of many such opportunities. Certainly, since the announcement of this project, inquiries into our services offerings has grown.”

The company, which has been marketing available space for rent within its current development at Gulf Industry Fair over the past several years, will return to GIF2014 this next February to actively market its new services – development management, facilities management and leasing management (bringing in tenants).
Majaal also recently announced it has achieved full occupancy for all three phases of its $45 million industrial facility at the BIW. Close to 25 companies are now operating in Majaal’s current development and they have collectively invested upwards of $100 million in terms of product and machinery.

The leasing of the final building, for which construction is nearing completion, was completed recently when a Saudi distributor signed for the remaining space after the Abudawood AlSaffar Company took 75 per cent of the building in a long-term lease signed in January 2013. Abudawood AlSaffar is the Bahrain distributor for a range of fast moving commercial goods (FMCG) including Procter & Gamble, Clorox International, Campbell’s Soup Company, Agthia, Ulker, C-Food, Walkers International and Falconpack.
Having fully developed its existing industrial land holdings, Al Arrayed says Majaal is considering two growth options, the first of which is the further development of its services offerings. The second involves the capital intensive activities of new plot acquisition, construction and leasing of industrial space either locally or regionally. He adds that Majaal has not ruled out further expansion within the BIW.

Any decision on new acquisitions would be driven by price and proximity to transportation hubs such as airports, ports and causeways. The company could consider buying land near the proposed Bahrain-Qatar Causeway or near any extension that may be approved for the existing Bahrain-Saudi Arabia Causeway. The company stresses that strategic location is key. It says it had foreseen the potential of the new Khalifa Bin Salman Port once the port project was announced and, accordingly, acquired its space in the nearby BIW.
The company will be gauging market reaction to its new service offerings when it takes part in Gulf Industry Fair in February.

Informed by this additional market feedback, Majaal hopes to decide on the best path for further growth, whether through the delivery of services or further development, by the end of Q1 2014. Believing the former option is very attractive Majaal will seek to further leverage its fixed cost and expertise to derive additional revenues. “The only way you can grow by a factor of 10 is if you have service as an offering. We wish to create a regional brand with Majaal and operate like the Sheraton or Hilton Hotels which do not own the hotel assets but rather sell services on a franchise model.”

Diversification into the service line can be achieved without expanding Majaal’s core team, which has demonstrated their expertise in both conceiving and executing the existing development as well as the Al-Mazaya project. Supporting the core team, the company regularly takes on interns from Bahrain Polytechnic, who are studying logistics management. Through a long-standing partnership, it provides students on-the-job training and absorbs graduates if positions are open and the candidates can add value. In the New Year the company will also be looking to add some junior staff in association with a Tamkeen training program. Al Arrayed says Tamkeen is an important resource for SMEs wanting to expand while also improving Bahrainisation.
_________________________________________________________________

Majaal Warehouse Company has appointed 3BL Associates Consultancy (3BL) to conduct an audit to improve its operational efficiency through a corporate sustainability framework.

The sustainability audit will be completed this month (January) and recommendations will be implemented within six months, said Majaal Managing Director Amin Al Arrayed.

3BL will conduct an internal analysis of Majaal’s current social and environmental performance by referencing more than 80 indicators outlined in the world’s most widely used sustainability reporting framework, the Global Reporting Initiative.

“As Majaal expands, we recognise that social and environmental dimensions will be integral to long-term sustainability and competitiveness of our facilities,” Al Arrayed said. “3BL will analyse our sustainability performance and identify the most significant opportunities for improvement that will have the greatest impact on the business. We expect improvement in operational efficiency, cost management, risk mitigation, as well as identification of untapped markets and revenue streams.”

The European Commission is currently adopting a directive requiring all large companies to disclose non-financial (social and environmental) information as part of their annual reporting cycle.