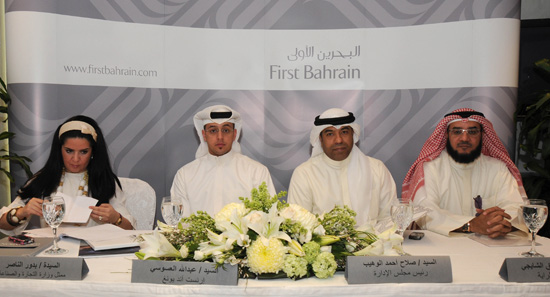 These positive results, combined with the performance of the previous two years, enable First Bahrain to meet the technical requirements for listing on the Kuwait Stock Exchange, which is planned for later in 2009.
First Bahrain’s total assets at the close of the 2008 financial year stood at KD 42.6 million, compared to KD 41.2 million at the end of 2007, with total equity increasing to KD 42.0 million, indicating that the company has only KD 0.6 million in liabilities. With twenty times more cash than debt, First Bahrain has very health levels of liquidity. First Bahrain also took a very conservative approach towards provisioning, registering impairments totalling KD 2.8 million which has resulted in a very clean and healthy balance sheet for the company going forward.

First Bahrain’s Board of Directors is supported by major stakeholders – KAMCO, Zomorrodah Holding Company, Iskan Housing Finance Company, Wafra International Investments and Action Group Holdings – all leading regional institutions in their respective fields. The results announcement follows the revision of the business strategy by the board and senior management of First Bahrain, taking into account new areas of real estate development the company has identified as becoming more prominent in the wake of the economic downturn.

Speaking at the AGM, Mr. Salah Ahmed Al-Wuhaib, Chairman of First Bahrain, commented “Our 2008 financial results reflect a strong balance sheet that is not over-leveraged, with healthy levels of liquidity, and a positive cash flow consistent with our prudent approach to business. They also underline our differentiated Sharia-compliant investment philosophy, which focuses on developing domestic demand-driven projects that will bring enduring value and sustainable prosperity to the local community, while also contributing to the growth of the economy.”
Mr. Al-Wuhaib added: “I am delighted to report that First Bahrain has laid solid foundations in 2008, and through considered investment and the expertise of our professional and committed leadership team, we can report strong financial results, upon which we are firmly placed to build further successes for the remainder of 2009.”
First Bahrain’s flagship project, a warehousing and logistics facility at the Bahrain Investment Wharf (BIW) continues to make excellent progress. During 2008 First Bahrain increased the land area from 464,000 to 716,000 square feet, in order to meet the increasing demand of affordable warehousing space for small-to-medium enterprises in the Kingdom of Bahrain, a sector which is an important engine of growth for the economy. The first warehouses are due to be delivered in nine months, with the entire project due for completion in 18 months.

A key priority for First Bahrain in 2009 is the expansion of the company’s operations across the region, as set out in its revised business strategy. First Bahrain’s focus on developing both its commercial portfolio and its human capital over the past 24 months has afforded the company a robust platform to achieve the broader goal of listing on the Kuwait Stock Exchange (KSE) later this year.