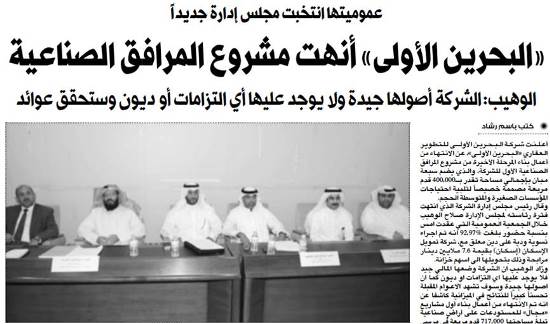 On the strength of these successes, Chairman Salah Al-Wuhaib announced his resignation along with the resignations of the members of the previous board. The AGM thanked Mr. Al Wuhaib for his six years of service and for supporting the company in achieving its main business objectives. The shareholders proceeded to elect into place seven new members to lead the Company forward.

Commenting on the conclusion of his term of service, Mr. Salah Al-Wuhaib, stated: “It is with great pleasure that I announce the completion of this, our first Majaal warehouse development, built on over 717,000 square feet of land within the Bahrain Investment Wharf (“BIW”), in the Kingdom of Bahrain. The leasehold rights to the land for this project were acquired shortly after my appointment as Chairman in 2008, and now as my season of leadership comes to a close, we have delivered the seventh and final building to our new tenants. Despite all the challenges of these past six years, including major global and local crises, First Bahrain has maintained focus and delivered on its promises.”

Conceived to address a supply gap in the industrial facilities market, First Bahrain initiated the Majaal project in early 2009, just after the onset of the global financial crisis.

Commenting on this key decision, Mr. Al Wuhaib added, “Shifting our focus away from our Seef project took tremendous courage and leadership. While our actions ran counter to the prevailing wisdom, we now see how prudent the decision was, saving First Bahrain and its shareholders from the global economic crisis which followed. Instead, we pivoted away from commercial and residential property to focus on industrial facilities, the one under-developed real estate sector in Bahrain. The results speak for themselves.”

While the Company did suffer a loss of KD (1,023,750) in 2013, related to the debt settlement and a reduction in the value of its undeveloped land holdings in the Seef district of the Kingdom of Bahrain, it was revealed that the Company ended the year in a strong cash position with secure rental income associated with the Majaal project.

Concluding the meeting, Mr. Al Wuhaib stated, “I am very pleased to pass on to the new leadership a Balance Sheet which is very healthy and poised for growth. Further fuelling my optimism is the fact that operational cash flow from the industrial rents earned by our development are now well in excess of our monthly expenses. I would like to thank all the shareholders for their support for me these past six years and I wish the new Board of Directors every success as they guide the Company onwards to a profitable future.”