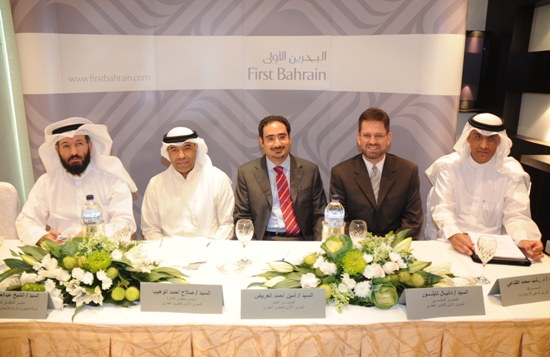 By the end of 2010, the company had leased more than 70% of the available industrial workspace at its innovative warehousing development, Majaal. This project was conceived to fill a gap in the market for quality work and storage space in unit sizes which are accessible to and meet the requirements of Small to Medium-sized Enterprises (SMEs).

Speaking at the AGM, Salah Ahmed Al-Wuhaib, Chairman of First Bahrain said: “I am pleased to hold this annual meeting and share with you the Company’s key accomplishments for 2010. With its ideal location and unit sizes that meet the requirements of SME’s, Majaal managed to attract 14 tenant companies across diverse range of sectors. Over 70% of the leasable space in the development’s first phase has now been occupied.”

“For the year ended 31 December 2010, First Bahrain is reporting profits of KD 84,851 compared to losses of KD 2.41 million in the prior year. This improvement in performance was a direct result of the Company’s success in leasing the Majaal property, which contributed to an overall increase of KD 478,801 in the investment value of the Company’s investment properties, compared to a loss of KD 2.1 million in the value of those properties during 2009”, Mr. Al-Wuhaib added.
Speaking on First Bahrain’s plans for the year ahead, the Chairman said, “Moving ahead this year, we will focus on the expansion of the second phase of Majaal, which will more than double the size of the facility, offering a total of 270,000 sq feet of leasable space. We are also preparing to expand the Majaal SME-focused warehousing facilities into the Kingdom of Saudi Arabia. We are in advance planning on this effort and we hope to be making major announcements about a partnership to facilitate this expansion soon.”