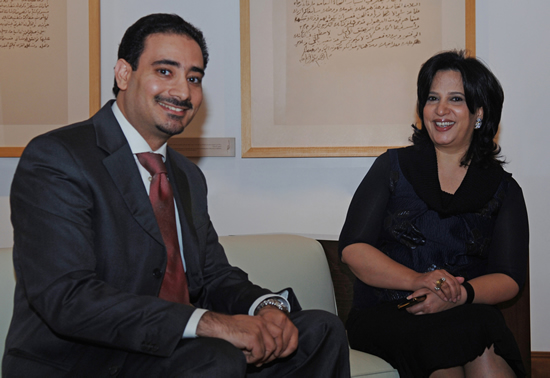 First Bahrain’s sponsorship will contribute towards the complete renovation and restoration of the existing buildings. Due to open soon, under the name The Information Room, Sponsored by: First Bahrain, the centre will act as a gateway to a range of facilities which will promote Bahrain’s rich literary, musical, and handicraft heritage.

Amin Al Arrayed, General Manager, First Bahrain Real Estate Development Company KSC, commented: “We have been following the restoration of the traditional Muharraq houses since the planning phase, and are thus proud to support the Information Centre, part of the Shaikh Ebrahim bin Mohammed Al Khalifa Centre for Culture and Research. As a developer invested in the country, we feel a responsibility to support cultural exchange along with education, and the Muharraq houses demonstrate that even amongst our modern skyline Bahrain still has a heritage to be proud of.”

Her Excellency Shaikha Mai bint Mohammed Al Khalifa, Founder & President of the Board of Trustees of the Shaikh Ebrahim bin Mohammed Centre for Culture & Research commented: “On the 12th January 2002 my idea for establishing a cultural centre became a reality. Since then one centre has become five, with the latest – Kurar House – focusing on the skill of traditional thread weaving. All this would not have been possible without the ongoing support from local companies and benefactors. I would like to thank First Bahrain for their support, which will help Bahrain’s rich heritage live on into the future.”

Al Arrayed continued: “First Bahrain’s support for the Shaikh Ebrahim bin Mohammed Al Khalifa Centre for Culture and Research is in alignment with our corporate values. We aspire to develop projects which bring enduring value and sustainable prosperity to our community with investments made in accordance with the principles of Sharia, all things which are reflected in these enduring icons of local architecture and heritage. We appreciate this new lasting association with the restoration of these traditional homes in Muharraq.”

The Information Centre is located at the entrance of the lanes leading to a number of traditional houses being restored and renovated by Shaikh Ebrahim Centre with an adaptive re-use of the space as venues for cultural activities, such as a children’s library and press heritage with future developments to include architectural heritage and a coffee shop for visitors. The Centre also incorporates specialised centres for poetry based in Manama.