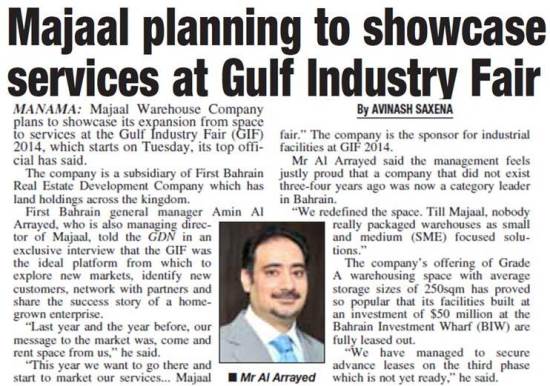 The company is a subsidiary of First Bahrain Real Estate Development Company which has land holdings across the kingdom.

First Bahrain general manager Amin Al Arrayed, who is also managing director of Majaal, told the GDN in an exclusive interview that the GIF was the ideal platform from which to explore new markets, identify new customers, network with partners and share the success story of a home-grown enterprise.

“Last year and the year before, our message to the market was, come and rent space from us,” he said.

“This year we want to go there and start to market our services… Majaal has a business model that can be replicated, it is a franchise model.”

He said the fair which sees a heavy flow of visitors from the entire Northern Gulf region, gave the firm access to Saudi Arabia, the biggest regional market, as well as Kuwait and Iraq. For, Majaal, participation in the event was to transact “real business” and it wasn’t just a public relations activity, Mr Al Arrayed said.

“Last year we had very good success and actually signed up two tenants that we met at the fair.” The company is the sponsor for industrial facilities at GIF 2014.

Mr Al Arrayed said the management feels justly proud that a company that did not exist three-four years ago was now a category leader in Bahrain.

“We redefined the space. Till Majaal, nobody really packaged warehouses as small and medium (SME) focused solutions.”

The company’s offering of Grade A warehousing space with average storage sizes of 250sqm has proved so popular that its facilities built at an investment of $50 million at the Bahrain Investment Wharf (BIW) are fully leased out.

“We have managed to secure advance leases on the third phase which is not yet ready,” he said.

It is expected to be completed by mid-March with the keys to be handed over then.

Nearly 30 SMEs now use Majaal’s facilities as the their back-end, storage operation. All kinds of sectors are represented, from banks to bakeries, said the chief executive.

These businesses are almost like a community within the premises.

“I would estimate the combined value of their investment and downstream contribution to the economy at upward of $500m.”

According to him, the company’s investment of $50m had had a 10-fold multiplier effect by bringing in these companies.

In terms of employment generation, he said there were around a total of 300 workers on site.

“The move into the services line of business was a significant achievement last year,” said Mr Al Arrayed.

In November, Majaal announced it had been hired by Al Mazaya Holdings of Kuwait to oversee the development and leasing of a $20m industrial facility also at BIW. The project is already under development and is expected to be ready in 16 months. The company has now become a project developer, leasing manager and facilities manager offering these services to third parties “We have signed up with Al Nafisi of Kuwait recently for a similar sort of project as Al Mazaya,” he said.